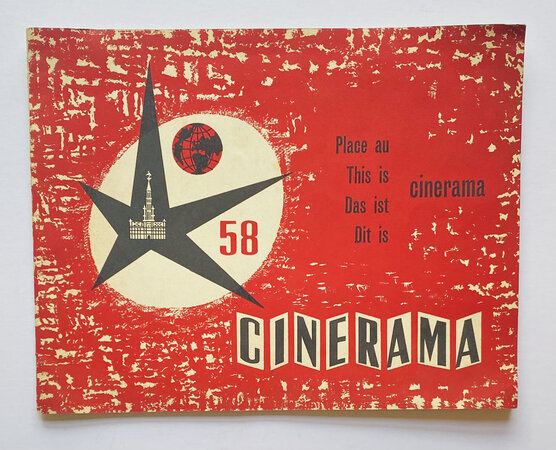 16pp With loosely inserted flyer which is a programme of the films to be shown in the Cinerama at the Brussels Worlds Fair of 1958. Illustrated with b/w plates and monotone line images. Long 4to. Striking wrappers. Centre fold is a large explanatory diagram of what a Cinerama comprises. Text in English, French German and Dutch. Nice item. Wide Screen cinematography became one of the attractions of World Fairs. The first manifestation was at Paris 1900 with the Lumiere Brothers. Each Worlds Fair had some manifestation of the wide screen. The trademarked process was marketed by the Cinerama corporation. It was the first of a number of novel processes introduced during the 1950s to keep interest in cinema allive. The first Cinerama film, This Is Cinerama, premiered on September 30, 1952 in New York. The same film, along with a programme of others was shown at Brussels.