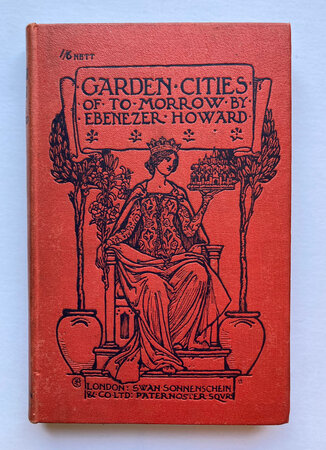 Garden Cities of To-morrow being the second edition of "To-morrow: A Peaceful Path to Real Reform"

[viii], [8], 2, [9]-167pp; half-tone frontispiece portrait and three plates; original red publisher's cloth with black decorated titles on upper board. Board slightly rubbed else very good. Portrait frontis water damaged and red ink from binding has seeped into the paper and tissue guard for this plate. Paper a little browned throughout else internally sound apart from damage to the portrait frontis. Key text on the Garden City principles. Howard (1850-1928) deplored the stream of people, during the nineteenth century, into the already overcrowded cities and, thus, the further depletion of the country districts. As early as 1888 he had derived garden city plans after reading Bellamy's Looking Backward. He determined that the most practical way to realize Bellamy's ideas in England was "to build a private enterprise pervaded by public spirit an entirely new town, industrial, residential and agricultural". This was the idea upon which he enlarged in the present work and which he carried forward nine months later by the formation of a Garden City Association.