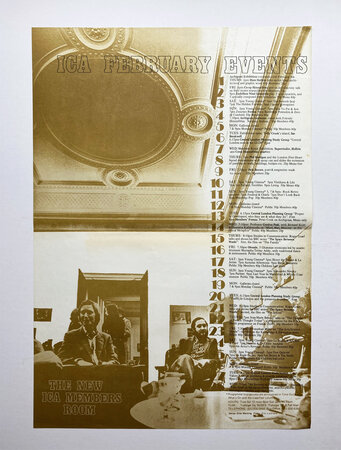 Poster 295x340mm in sepia, printed on white paper with black over printing. Lists the February Event Programme at the Institute of Contemporary Ars February 1973. Photograph of ICA Members Room by Eric Lochrane forms background. Has been folded but insignificant crease across poster. The Archigram exhibition held at the ICA would have been in full swing. It hosted an exhibition of architectural graphics in 1973 that included Adolfo Natalini, Hans Hollein and CoopHimmelbIau. Contributing speakers at events in February that year included Hans Hollein, Co-op Himmelblau, both associated with the Architectural Association. Ian Brakewell also exhibited there. There are listed many cinema and music events indicating the integration of arts, music, cinema and architecture for which the centre was then a known focus. In temporary mount.