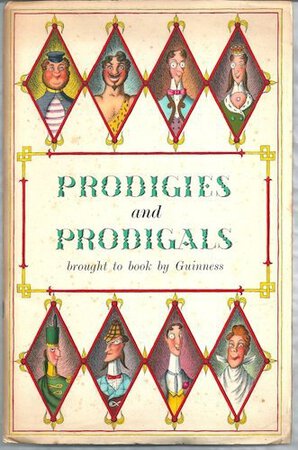 < >
The history of the Guinness Doctors' Books are that Bensons, the advertising agency acting on behalf of Guinness at the time, actively sought testimonials from doctors to substantiate and give credibility to the "Guinness Is Good For You" proposition. Thousands were happy to oblige. As a means of encouraging the relationship and fostering goodwill, the agency hit upon the idea of producing collectable, limited-edition soft-back booklets which were sent out to doctors each Christmas from 1933 until 1939; the practice was revived after the war in 1950 and continued until 1966. The themed, lavishly illustrated books, notable for their whimsical charm and overt literary parody, contained many lateral - and often ingenious - references to Guinness, both visual and verbal.
Guinness Illustrated by Antony Groves-Raines Arthur Guinness, Son and Company

Prodigies and Prodigals brought to book by Guiness

Guinness 24pp colour illustrations throughout the text, a collection of parodies and imitations of common rhymes advertising Guinness. Paper wrappers which are stapled. Upper wrapper has a brown stain line on it and these a re generally a little dusty else good copy.