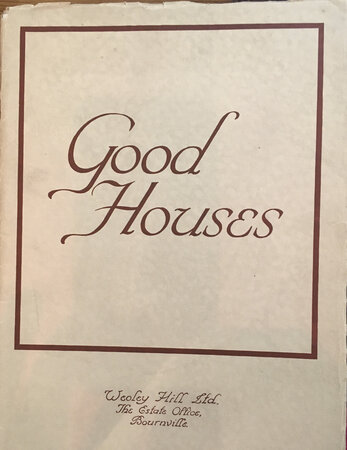 Good Houses: a Description of the Houses Being Erected Upon the Residential Estate Known as Weoley Hill

(255x190mm). Staple bound prospectus for would be purchasers, printed by Drew and Hopwood Ltd of Birmingham. pp23 (1) with text and 7 tipped-in sepia photo plates. Cream card wrappers with narrow yapp edges, front titled in brown. Spine rubbed; with split from foot of length (90mm), associated with which a little loss extending to rear wrapper. Binding staples slightly rusted, negligible spread of rust pigment. Loosely inserted:- three folding leaves - two dated Dec 1929, the other Jan 1930 - with line illustrations, plans, and particulars of house types 3B6, 3C5 & 3.B.14 / undated (c1930) folding plan "Lay-out of Portion of North Side of Middle Park Road" / and four undated (c1930) leaves, each with monochrome photo view of a Weoley Hill interior. Despite minor defects, the booklet contents and all inserts near fine, overall condition very good. After 1914 Weoley Hill Ltd was set up as a housing association to work in partnership with Bournville Village Trust to lease houses to office workers, many of whom, though not all, worked at Cadbury's. The earliest part around Witherford Way, was built before the outbreak of World War 1. From Weoley Park Road to Middle Park Road was built from the 1920s to the outbreak of World War 2. The images here seem to be drawn from these phases. A later phase was constructed post World War II reputedly, after Cadbury stopped sourcing local milk supplies for the factory at Bournville, released more land to the project. Ephemeral publication.