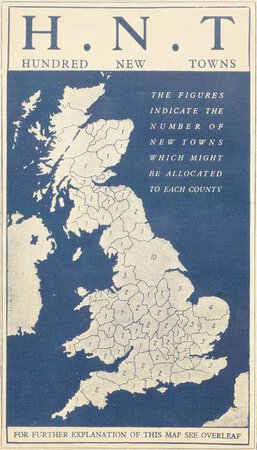 A hundred new towns for Britain;: A scheme of national reconstruction proposed by J 47485

Revised and enlarged edition. 72pp Illustrated with colour and b/w line drawings, plans and diagrams showing variant layouts for towns and housing blocks in differing geographic locations. Thin card wrappers, blue lettering on greenish card. Perfect bound. Small folio. This publication advocates a 100 new towns to solve the housing crisis in the inter war period. "Edwards had been an early and persistent critic of the Garden City-inspired orthodoxy of housing development in the first half of the twentieth century and of the powerful Idealist and Socialist 'Ruskinian tradition' in architectural thought carried forward by Unwin and his circle". The project was critiqued by N E Shasore in a lengthy assessment of the career of Edwards and who concluded the plan for a hundred new towns was "a deliberate and sustained propaganda campaign, based on fastidiously worked out and ardently held principles of civic design intended to steer policy". NE Shasore, Architectural History, Volume 61 2018 , pp. 175-203. Wrappers aged leaving uneven tone on both upper and lower wrappers. Internally good copy. Hard to find.