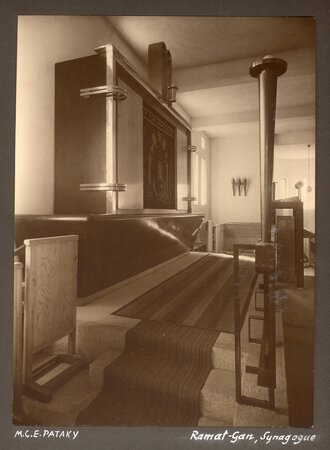 33 photographs in sepia and black and white in two hand made albums: Album 1 Album size .350x240mm, stiff brown card, ribbon tied. 9 photographs comprising 4 images of the Ramat -Gan Synagogue, 170x235, designed by M C E Pataky, one smaller image of a bank interior and 3 images of apartments designed by Gandler. Album 2 comprises images entitled "Making of Architectural Models according to exact measure light of weight and sold by Professor James Bieberkraut." This was presumably a display album illustrating the kinds of items which Bierberkraut could make. Album size 250x175mm. 14 pages, stiff brown card, ribbon tied, with small mounted photographs and six loosely inserted duplicates in black and white. The images are approximately 120 x170 or less, for commercial, religious and domestic buildings, some images of housing schemes in Germany. James Bieberkraut [1879-1975] married art photographer Helena Joseph in 1928. Until 1934 James Bieberkraut was demonstrably based in Munich and worked as a painter and etcher.They lived at a number of residences in Munich; including Neureutherstrasse 18, and finally Linprunstraße then, probably because of the Nazi Regime, emigrated to Palestine in 1934. These images suggest they moved to Tel Aviv. Both extremely talented artists in their own right, Helene as an architectural photographer and James as an etcher, engraver and model maker as well as book restorer in this latter capacity assisted in unrolling the Dead Sea Scrolls for restoration. Helene's photographs here record the contemporary White City Style of the Bauhaus emigré architects who made their homes in Tel Aviv and the wider areas of Isreal after leaving Germany. Very good.