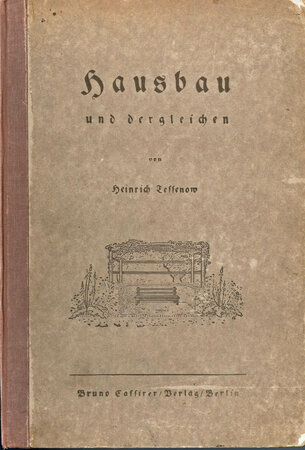 145 + [1]pp. Cloth spine and boards. Upper board with titles and image of a garden seat typical of his drawing style. Illustrated with b/w photographs and exquisitely drafted line illustrations by the author. A little worn at the edges else very good. Gothic script. Illustrates the architectural projects of Tessenow including his works in the garden city of Dresden Hellerau comprising housing. His characteristic designs involved repetitive elements in a simple and austere style communicated in the images in this book. He also built the theatre at Hellerau [ recently restored ] which was an experimental performance space which influenced Gropius and other at Dessau where he subsequently took up a position in theatre design et al at the Bauhaus. Hard to find.