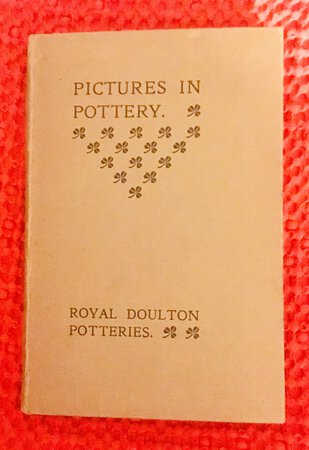 Printed at the De Montfort Press Leicester. 52-page catalogue of Doulton & Co's under-glaze pictorial tile panels made for three London children's hospitals/ wards at the turn of the century. 8vo. The catalogue is bound in fawn-coloured boards: the front cover carries the short title 'PICTURES IN POTTERY' and the firm's name 'ROYAL DOULTON POTTERIES', each with decorative trefoil motifs. The text is printed in black on cream matt paper and the photogravure illustrations on white glossy paper; the coloured frontispiece, illustrating a different version of 'Here we go gathering nuts in May' to that on p.40, is tipped in. The first nineteen panels illustrate mainly nursery rhymes and were made for University College Hospital; the next six, for St Thomas' Hospital, show pairs of scenes from fairy tales; the next four show nursery rhymes; and the last two, made for the Children's Hospital at Paddington Green, illustrate the Nativity, and Christ as the Good Shepherd. Scarce. The six panels for St Thomas's were restored in 2008 and relocated. Painters not identified but both Margaret Thompson and William Rowe were involved in making these. 'Mary, Mary, quite contrary' design on p.19 by Margaret E Thompson identified from V & A catalogue.