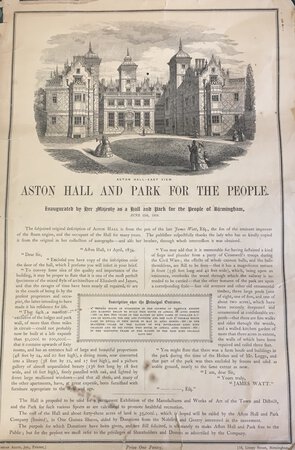 Broadside publishing the Inscription proposed for over the Principal Entrance and including a letter republished from James Watt of 11 April 1834 and engraving of Ashton Hall, East View. The broadside announced that the hall was to be used for an exhibition of the Manufactures and Works of Art of the Town and the park was to be used for sports and to promote healthful recreation and explained the proposed funding through the establishment of the Aston Hall and Park Company through sales of shares. Frayed at edges else good. Unusual survival for a broadside relating to civic facilities.