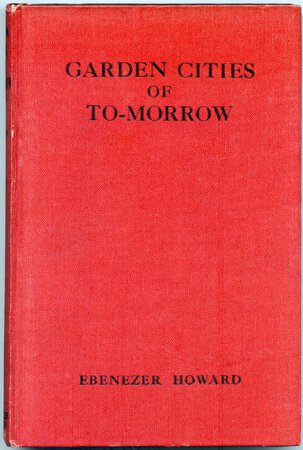 Garden Cities of To-morrow being the third edition of "To-morrow: A Peaceful Path to Real Reform"

3rd edition second issue. This edition of Howard's highly important and influential work on Garden Cities was reissued by George Allen & Unwin Ltd using sheets from the 1902 edition together with insertion of a forward new forward by Sir Theodore Chambers dated June 1922. [viii], [8], 2, [9]-167pp; half-tone frontispiece portrait and three plates; original red publisher's cloth, spine lettered in upper board in lettered in black, foot of spine lettered 'George Allen & Unwin Ltd.' Slightly rubbed else very good. See Printing and the Mind of Man 387. Early edition of this key text on the Garden City principles. Howard (1850-1928) deplored the stream of people, during the nineteenth century, into the already overcrowded cities and, thus, the further depletion of the country districts. As early as 1888 he had derived garden city plans after reading Bellamy's Looking Backward. He determined that the most practical way to realize Bellamy's ideas in England was "to build a private enterprise pervaded by public spirit an entirely new town, industrial, residential and agricultural". This was the idea upon which he enlarged in the present work and which he carried forward nine months later by the formation of a Garden City Association. This copy from the printer Arthur Wiliam Brunt, signed on the front paste down by him and who was closely connected with Letchworth Garden City and wrote the Pageant of Letchworth 1903-4. Marked up with some red underlining identifying the key principles of Howard. Extra folded maps pasted onto the front and rear boards; In front, layout of Letchworth shown in colour with the names of Raymond Unwin and Barry Parker printed. Rear map comprises a key plan showing the relationship of Letchworth to Kings Cross and the wider estate and proposed town and was produced by the First Garden City Limited 1904. Both these maps have some tears along folds but significantly add to the volume in translating Howard's principles into a reality.