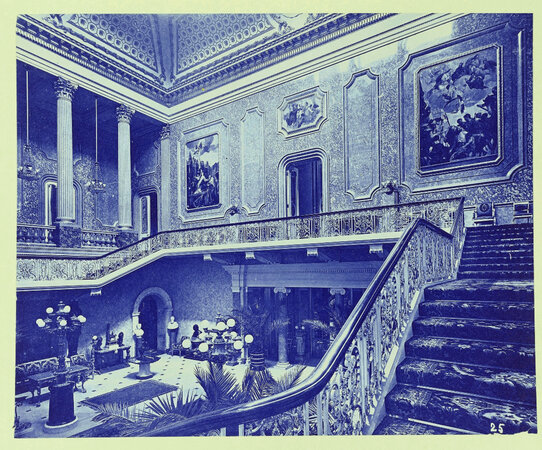 Manchester University Special Collections hold a set of these 50 images but they are rare. Another set of these images comprising 86 were also issued. Worldcat lists one other complete set of Intérieurs Anglais, at the Stiftung Bibliothek Werner Oechslin,Switzerland. The Getty Research Institute holds 82 of the set of 86 cyanotypes (lacking nos. 10, 65, 67 and 81). RIBA also hold part of this series. Historic England have the largest holding of Bedford Lemere & Co's surviving photographs: 21,800 large-format glass negatives and 3,000 unique prints, which comprises one quarter of the firm's estimated total output of 100,000 images.
Architectural Photography BEDFORD LEMERE & CO.

50 cyanotypes, each approximately 9½ x 11¼ inches (240 x 295mm.) or the reverse, printed on paper 9¾ x 11⅞ inches. (247 x 302mm), each numbered (from 1 to 50) in the negative. Complete set as issued. 'From 1881, and possibly earlier, he [Bedford Lemere] produced a printed catalogue of available photographs, with annual supplements thereafter. Individual photographs could be ordered from these catalogues, while for customers who needed illustrations of particular themes, separate lists were available of photographs selected from the existing stock to meet their needs. In 1881 these specialised lists included 'Old-Half timbered and Stone Mansions' and 'Old and modern Queen Anne Residences, Schools etc.', and over the next 20 years many more selections would be available including 'Town and Country Houses and Mercantile Buildings', 'England's Homes: Blenheim, Hatfield, Haddon, Hardwicke [sic] etc.' and several series of furniture and woodwork' (Nicholas Cooper, The Photography of Bedford Lemere & Co (Swindon,English Heritage, 2011), p. 15). This set was presumably made for the French speaking market. All the images in this set have been identified and a list is available with the collection. They are almost all country house interiors focusing on the main rooms of the house, staircases, panelling and so on. Preserved in a modern handmade box which also contains the original gilt lettered label loosely inserted. Making cyanotype copy prints, from a series of reference or 'master' prints to compile a catalogue would have been an economic solution to providing images, however, the ease of production method reduced the apparent intrinsic value as images as the blue colouring was considered to be inferior to the sharpness of the original albumen prints. However such trade publications rarely appear and this collection is a superb example of a photographic trade item from which the specialist purchaser or public could select images they required. The images would then have been printed up as architectural source material as albumen prints. According to Cooper, in 1881 standard albums of 50 or 60 images from the Royal Architectural Museum were available and another album of St Pancras containing 20 images could be purchased. This set of images is a rare survival of how commercial architectural photography was emerging in the late 19th century; one from which a client could pick and mix preferences. Architectural photography at this time was booming becoming the must have item for architectural practices. Where collections are known to have existed they often contained a combination of images of this kind alongside those collected on tours to Europe where a trade in photographs which showed architectural monuments, details and settings of buildings were produced for key centres such as Venice, Florence and Rome.