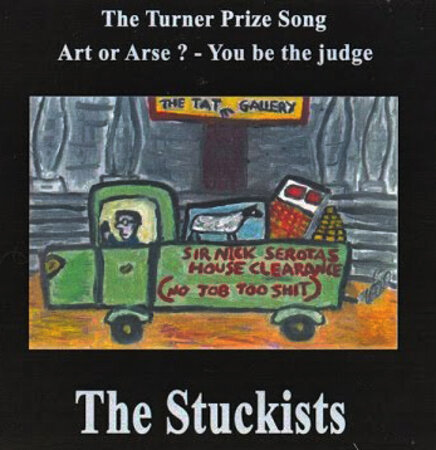 < >
THE STUCKISTS - CHILDISH. Billy, Words and Music by.

The Turner Prize Song Art or Arse? You be the judge

Limited edition CD. Includes the title song, The Turner Prize Song Art or Arse? - You Be the Judge with Tracey Emin's voice at the beginning, and another song, Anachronism in the UK, both written and sung by Billy Childish with Wolf Howard, plus The Turner Prize Manifesto, read by Charles Thomson. In original plastic box with cover picture of "The Tat Gallery". Produced in 2000 in association with a rival exhibition, The Real Turner Prize Show, which denounced the Turner prize, one of the most prestigious in the world, as "an ongoing national joke". The serious point of the Stuckists was that the traditional skills of painting and sculpture were rubbished by what they called "the Serota brigade" after Sir Nicholas Serota, director of the Tate.