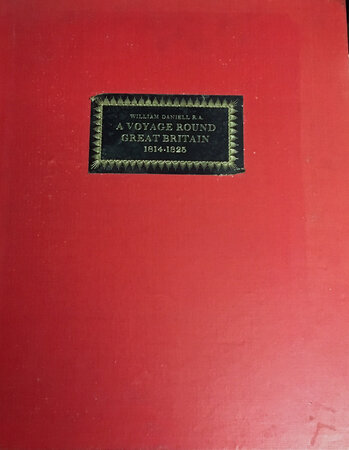 < >
From the library of the architect Winston Barnett.
Limited edition DANIELL. William and AYTON. Richard,

Limited edition set of plates in two red buckram custom made archival boxes with gilt lettered paste down labels on upper boards as issued. This numbered no 23 of 90. Includes, note on making of the edition 11pp + 3pp illustrated, loosely inserted in the top of the first box. 308 plates, various sizes, (c229 × 305mm) organized in 8 sets of paper wrappers representing each of the original 8 volumes. In early 1813, Daniell conceived of the ambitious plan to travel around the entire coastline of Britain while producing an illustrated work of the voyage. He set out to record the people, places, towns and villages around Britain's coastline. Eleven years later he completed his magnum opus having travelled from Land's End to John 0'Groats via the west coast, then back to Land's End via the east. The result was this collection of 308 aquatint engravings reproduced here. Very slightly rubbed else very good. A celebration of the rural coastline of Britain, The actual original aquatint printing plates survived and were acquired by the Tate Gallery Publications Department in the late seventies. Alecto Historical Editions was invited to take a limited number of impressions for the Tate and their Patrons and Friends in 1978. Just 100 impressions from each antique copperplate were taken for the published edition, which sold out.